Lapland is Finland’s northernmost region, a sparsely populated area bordering Sweden, Norway, Russia and the Baltic Sea. It’s known for its vast subarctic wilderness, ski resorts and natural phenomena including the midnight sun and the Northern Lights. Capital Rovaniemi is the gateway to the region. The homeland of the indigenous Sami people, which extends into neighboring countries, centers on the far north.

Finland, Lapland, is the magical arctic region full of contrasts. In fact, contrasts are a key factor in the allure of Lapland where 24-hour sunlight in the summer replaces the dark winter days filled with Northern Lights.

Every season in Finnish Lapland is uniquely different from each other. The inhabitants of the region say that Lapland actually has 8 seasons instead of 4. 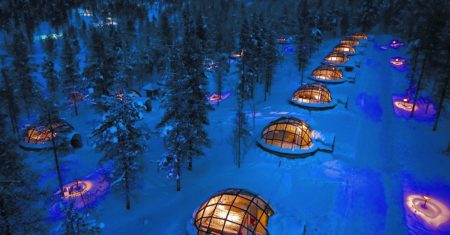 Features
Prices from
€569 pn
based on low season
﻿